With global stock markets in bear market territory due to the worldwide economic slowdown caused by COVID-19, we wanted to provide you with some context and information on previous challenging economic environments. While it is difficult to draw conclusions from observing the past, since financial markets habitually behave unpredictably in the short run, history provides a reason for optimism about an eventual investment rebound and economic recovery. Simply, economies recover from recessions and markets typically bounce back before recessions end.

No bear market or economic decline is exactly like another. However, post-World War II bear markets that occurred, along with a recession, have generally followed a pattern as shown in the table below. 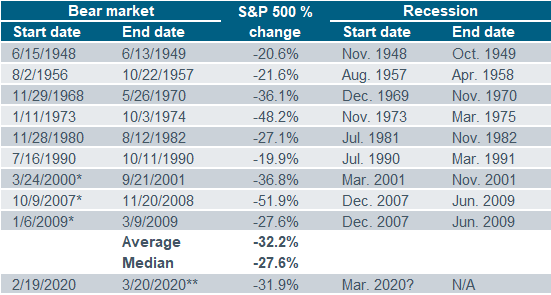 ** Does not denote end date.

The bear markets listed above lasted from as little as three months to as long as nineteen months. Stocks declined an average of 32.2% and the stock market recovered on average 4.25 months before its associated recession officially ended.

We also know from history that stock markets tend to bottom while economic news remains bleak, meaning before indicators of economic activity, such as the unemployment level or gross domestic product (GDP) start to improve. The graph below shows that the S&P 500’s recovery began in March 2009 while unemployment continued to rise. When in fact, unemployment didn’t peak until September 2009. 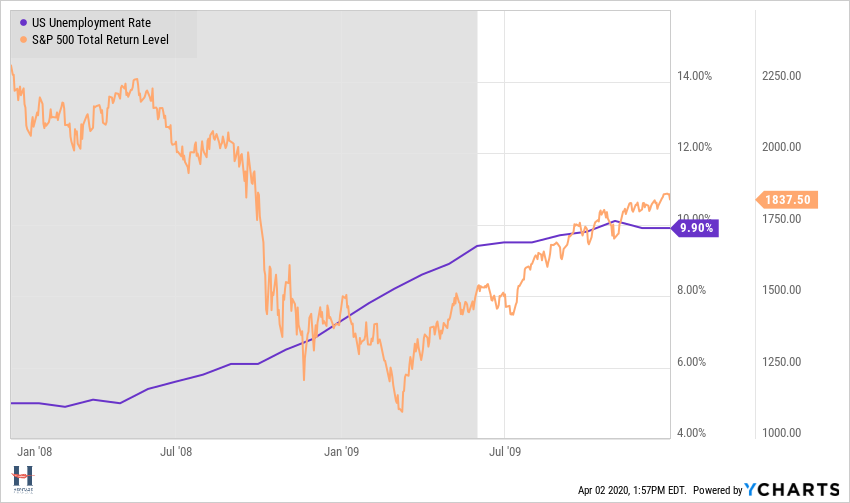 The bear market of the early 2000s followed a similar pattern. September 2001 marked the low for U.S. stocks while unemployment did not improve until June 2003. (Source:  YCharts)

What if this time it’s worse? It’s a natural question and this bear market has been worse in one regard as we have never seen one develop this quickly, and there will certainly be unprecedented aspects to this recession that society will be forced to adapt to. That does not mean it will permanently impair the economy’s ability to recover. If you recall, many people had similar concerns during the Global Financial Crisis. They thought new regulations would prevent banks from lending enough to stimulate economic growth. There were fears about massive inflation given all the Federal Government stimulus and the Fed’s quantitative easing and whether real estate prices would rebound. Capitalist economies have a remarkable history of overcoming challenges, and while the worst may be yet to come economically, we have seen a quicker and stronger response from the Government and the Fed this year than we saw during the 2008 crisis. Also, important to note is the recently enacted stimulus programs are the largest ever on record.

Looking Ahead to the Return of Prosperity

The global COVID-19 pandemic will take its toll, but we remain confident that this crisis will be followed by an economic rebound, prosperity and eventually, new market highs. We remain vigilant in our focus of closely monitoring your portfolio and the underlying managers that we have diligently researched and entrusted with managing your assets. We thank you for your confidence in our firm and as always, we welcome your comments and questions.

“Box of Letters: What Shape Will the Recession/Recovery Take?